BIDV hands over new classrooms for students in Laos 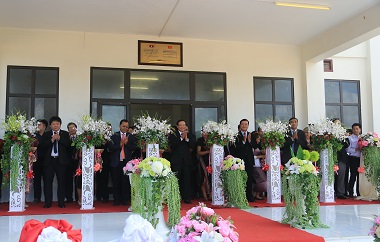 On 13 November in Laos, BIDV coordinated with the Department of Education and Sports of Sekong Province to organise an inauguration ceremony and handover of classrooms and learning equipment to Dakcheung High School in Dakcheung District, Sekong Province.

Vietnam and Laos have built a friendly relationship for years and this special relationship has strengthened, to the benefit of communities in both countries. The leaders of the two countries always prioritise human resources training and the construction of educational facilities.

In 2016, following an agreement between the leaders of the two countries, Vietnam donated a school to Sekong province. Trusted by the Parties, the States, and the Governments of Vietnam, BIDV was honoured to be tasked with implementing the construction of the school in Laos’ Dakcheung District.

The Dakcheung high school project kicked off in June 2018 valued at USD1 million and funded by BIDV. After just over a year, the construction was finished and the school was completed and put into use. The modern school features two floors with six classrooms, two laboratories, function rooms, a library, a meeting hall and physical training area and other modern learning equipment. The school is the symbol of good friendship between Vietnam and Laos.

Mr. Kongsy Sengmany, Deputy Minister of Education and Sports of Laos, believes the school will create more favourable conditions for the teaching and learning of teachers and students in the remote province of Sekong. The Lao Deputy Minister hopes that the local authorities, teachers and students will preserve the school for future generations to learn and train, thereby contributing to the development of the country.

Over the past 20 years, besides fulfilling its role as an effective bridge connecting the two economies, BIDV has made responsible, positive and meaningful contributions to the socio-economic development of Laos, becoming a symbol of a community business in the country. Since 2008, BIDV has donated USD14 million for social security activities in Laos.