Win an apartment and luxury car with BIDV SmartBanking

BIDV SmartBanking has impressed customers for its user-friendly features, outstanding services, as well as exciting prizes for the lucky customers.

In July 2021, BIDV has rewarded lucky customers of 2 promotion programs.

This is the luckiest customers out of millions of customers nationwide participating in the program, lasted from 20 March to 30 June. Customers who conducting a transaction from VND500,000 via SmartBanking are eligible to join the program. Beside the Special Prize, BIDV has rewarded weekly prizes including first prizes of VND10 million, second prizes of VND2 million. List of winners here. 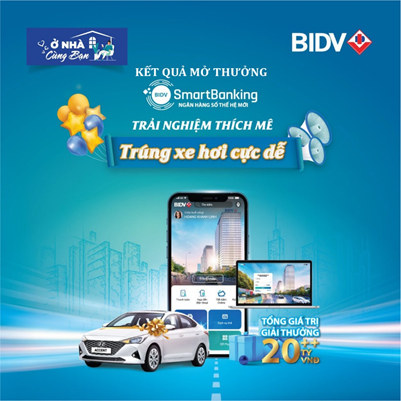 Nguyen Thu Hoai, winner of the Special prize said: “I’m super surprise and feeling lucky to be the winner. As a youngster, I have been using BIDV SmartBanking regularly to transfer money, pay bill and shop online. It’s very useful”.

Another young customer who also loves to use BIDV SmartBanking, Phan Thi Kim Anh, a student of University of Languages and International Studies has become the luckiest winner of program “Scan QR PAY and win an apartment”. She won a Vinhomes Oceanpark apartment worth VND1.5 billion.

Sharing her chance to win, Kim Anh was having dinner with friends and paid the bill with BIDV SmartBanking using VNPAY-QR. “Scanning VNPAY-QR has become my habit when making payment at restaurents and shops, which is very convenient and safe. I hope that in the future BIDV would bring more chances for customers to experience advance technology and lucky gifts”.

SmartBanking is the new generation of BIDV Digital banking, owning outstanding features such as: Instant and automatic bank account opening with eKYC, using Biometrics and AI; customization allowing users to change avatar and organize on-screen features; synchronize between website, mobile, smart watch and smart keyboard (allowing banking transactions while on message app like Zalo, Messenger, Facebook, Viber,…) and a variety of new features and an ecosystem of over 2,000 services.