On 27 April 2022, in Hanoi, the Joint Stock Commercial Bank for Investment and Development of Vietnam (BIDV) solemnly held a ceremony on receiving the noble awards including Third-Class Labor Medal of the Socialist Republic of Vietnam; Second-Class Development Medal of the Lao PDR; Moha Sena-Class Sahametrei Order of the King of Cambodia and 65th anniversary (26 April 1957 - 26 April 2022).

The ceremony were attended by Leaders of the Socialist Republic of Vietnam, the Lao PDR, and the Royal Government of Cambodia; and leaders of central and local departments, ministries of Vietnam and Laos, Cambodia, and the Russian Federation; domestic and foreign customers, partners.

After 65 years of development with more than 27 years of commercial operation, until now, BIDV has become a multi-owned financial institution, with multi-national, multi-purpose, multi-sectoral business and open and transparent operation following international governance standards and practices... BIDV currently has a comprehensive ecosystem of banking - insurance - securities - financial investment and a wide network of 1,085 branches, transaction offices domestically and overseas, 10 subsidiaries and commercial presences in Laos, Cambodia, Myanmar, Russia, Taiwan (China); more than 27,000 well-trained employees and more than 15 million individual customers, 500,000 corporate customers and 2,300 financial institutions worldwide... BIDV’s total assets reaches over VND1.76 quadrillion, earning No.1 position among Vietnam’s commercial banking system; with charter capital reaching VND50,585 billion - the highest among joint stock commercial banks in Vietnam; State capital in BIDV has been secured and constantly developed. Over the past 5 years, BIDV has contributed over VND28,000 billion to the State budget, maintaining itself one of the largest contributors to state budget in Vietnam.

Recognizing great efforts of many generations of BIDV employees during its 65-year history, the Party and State of Vietnam have awarded BIDV many noble titles and awards such as the Labor Hero, Ho Chi Minh Medal, Independence Medal, Labor Medals of all classes; the Lao PDR has awarded BIDV the Order of Independence, the Order of Labor, the Order of Friendship; The King of Cambodia awards the Royal Order, the Order of Merit... On the occasion of its 65th anniversary, BIDV continues to be awarded with noble awards including Third-Class Labor Medal of the Socialist Republic of Vietnam; Second-Class Development Medal of the Lao PDR; Moha Sena-Class Sahametrei Order of the King of Cambodia. 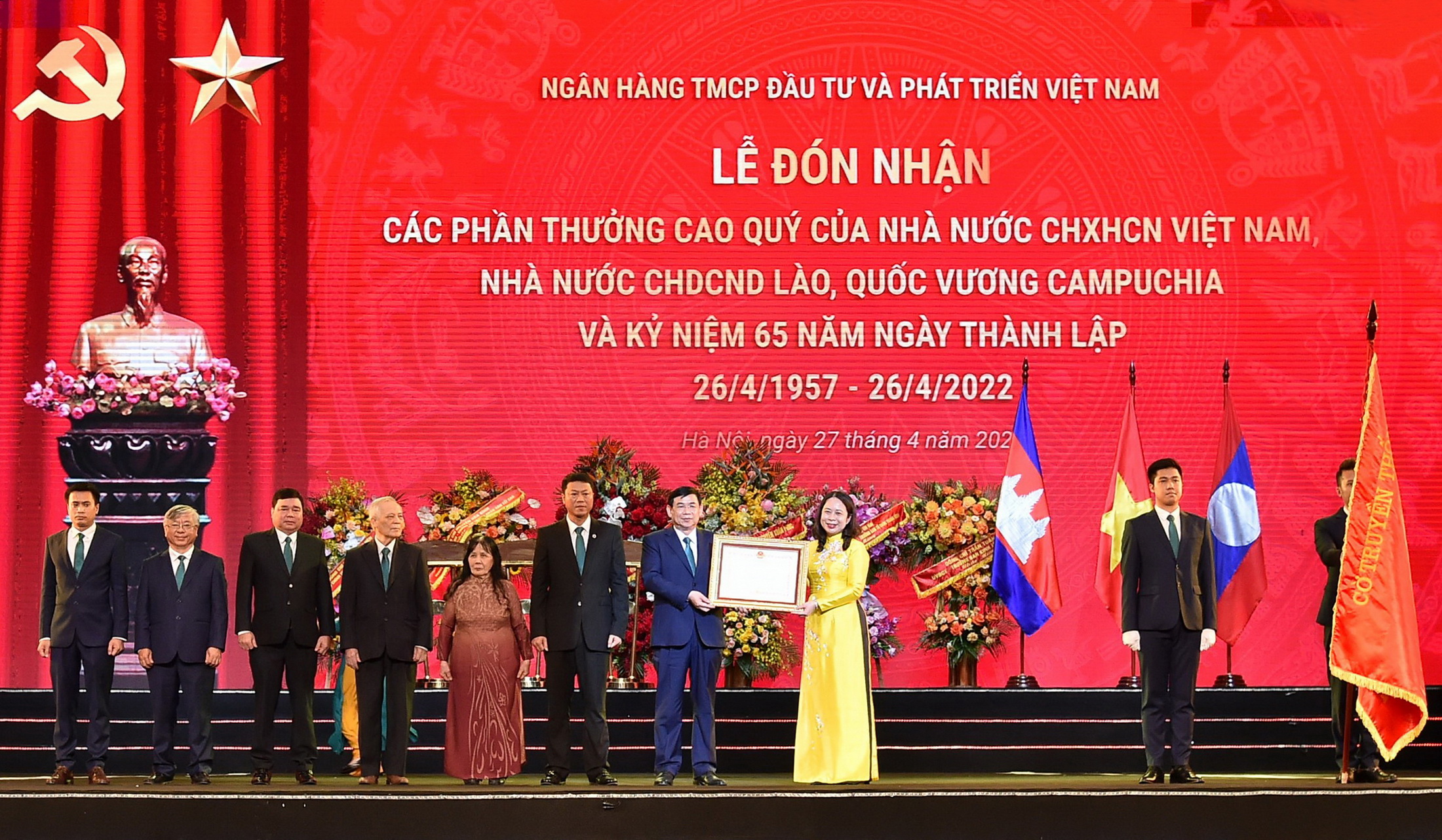 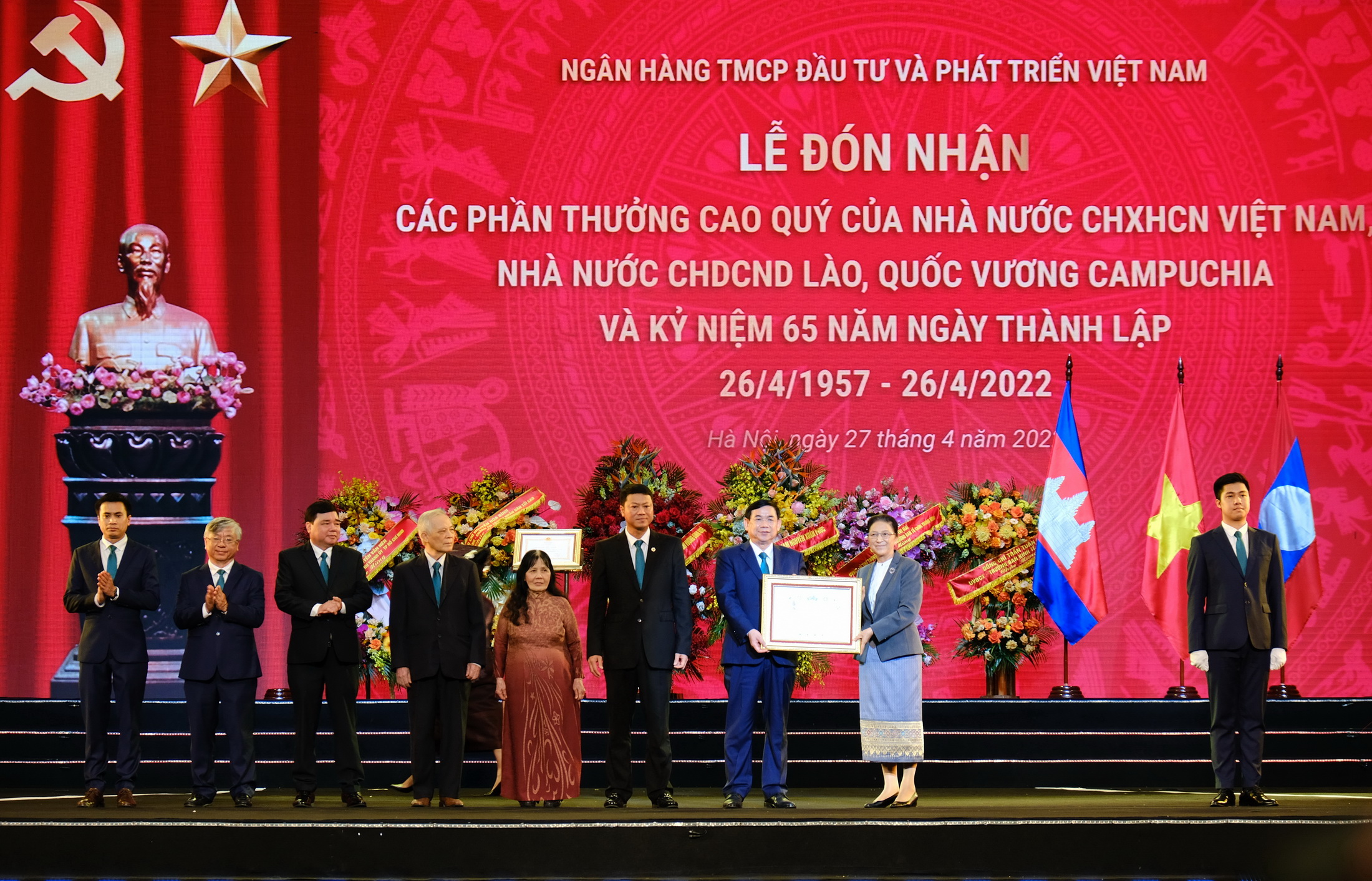 Mrs. Pany Yathotou- Vice President of Lao, awarded the Decision on awarding the Second Class Development Medal to the representative of BIDV 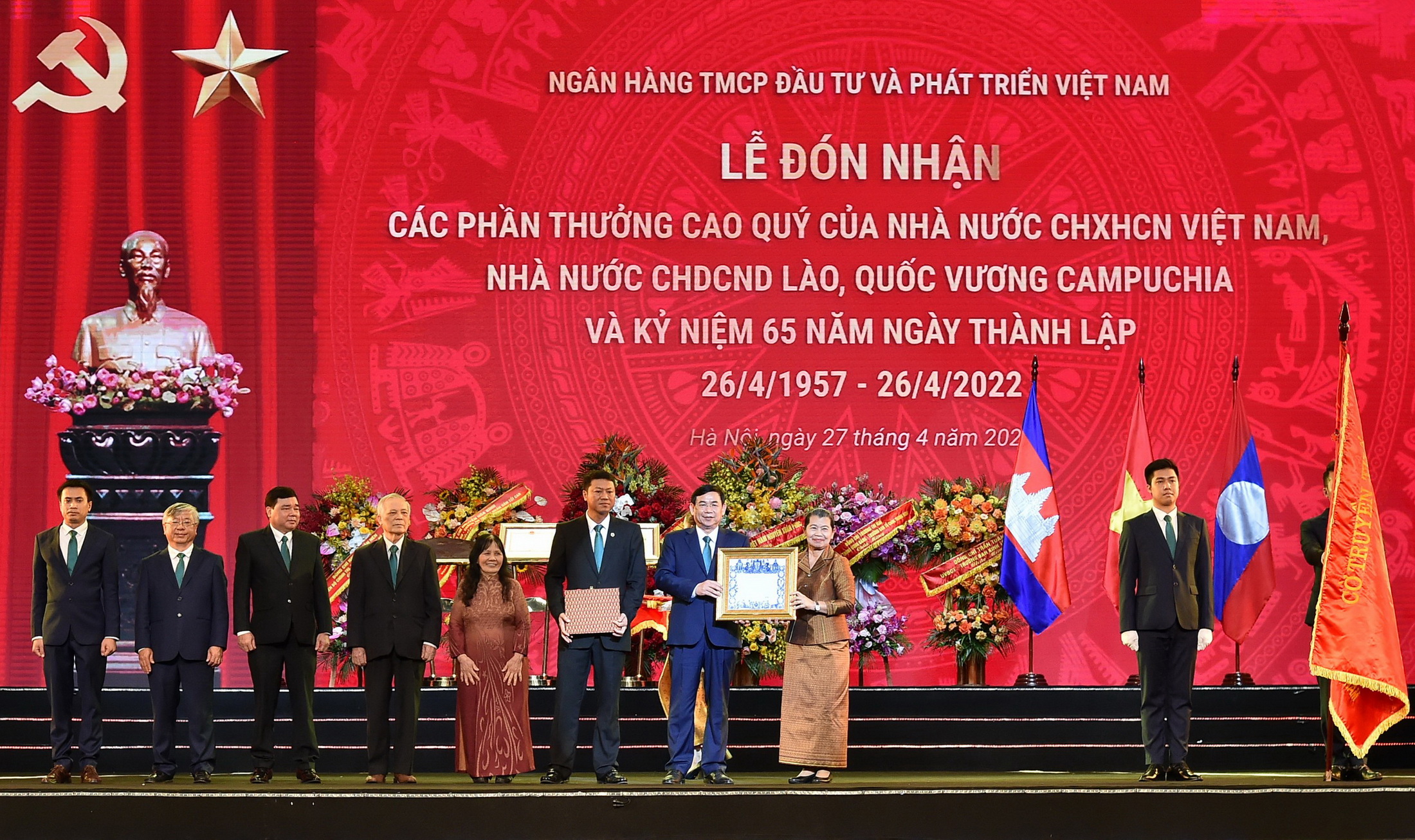 Mrs.Men Sam An- Deputy Prime Minister of the Royal Cambodian Government awarded the Decision on awarding the Moha Sena Sahametrei medal to the representative of BIDV

Speaking at the Ceremony, Mr. Le Minh Khai – Vietnam’s Deputy Prime Minister - praised BIDV’s great efforts, excellent achievements and great contributions. BIDV has always been a pioneer in credit and banking operation, well implementing the guidelines and orientations of the Party and State. In particular, when the economy was heavily affected by the Covid-19 pandemic, BIDV performed its leading role to implement many solutions to ensure smooth operation and seamlessly provide banking and financial services to the economy; actively support businesses and people to overcome difficulties, maintain and develop production and business operation, and stabilize their life... 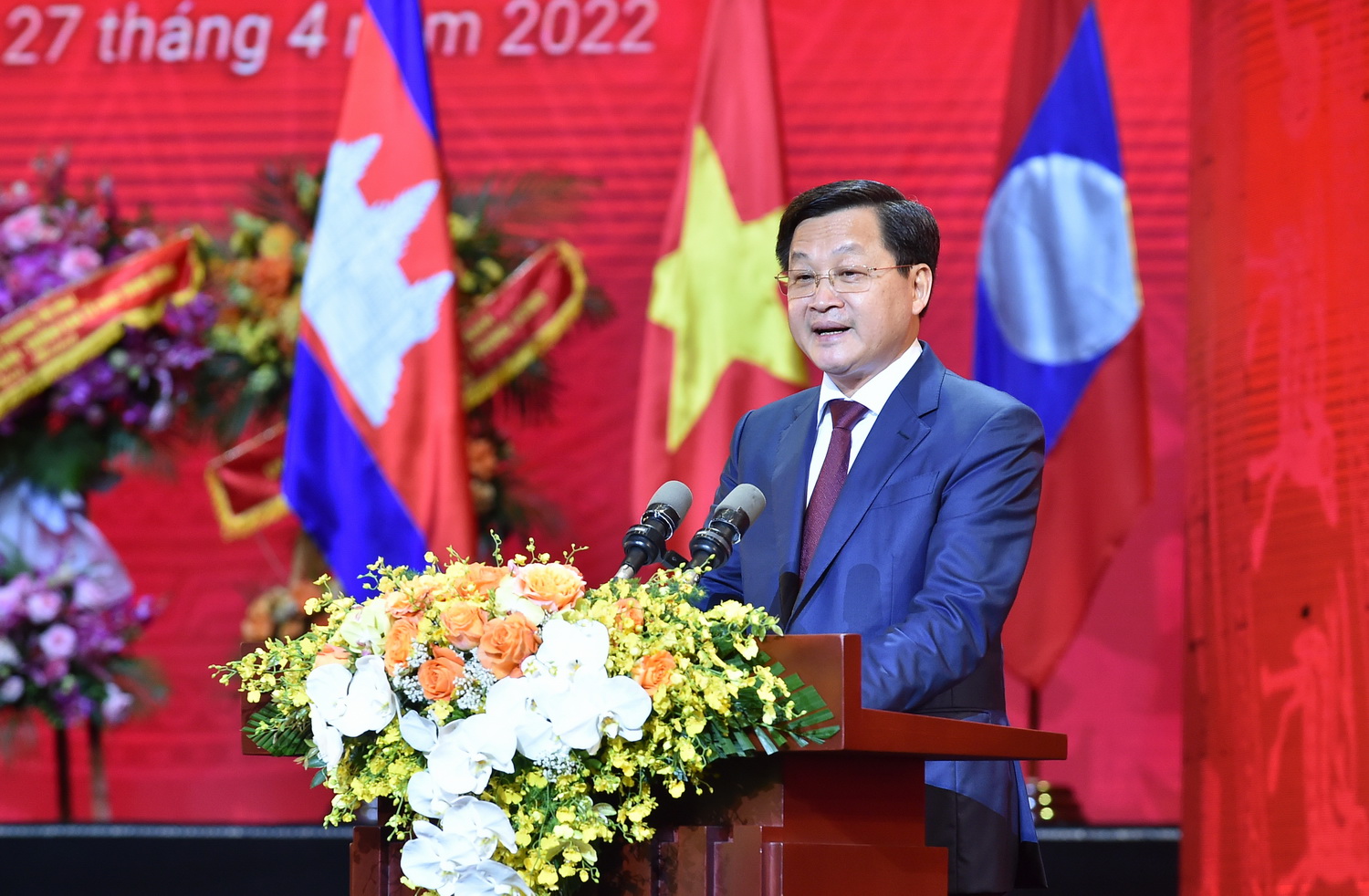 Speaking at the Ceremony, Mrs. Nguyen Thi Hong - Governor of the State Bank of Vietnam - acknowledged and highly appreciated the proud achievements that BIDV’s generations have built together. The Governor specified the tasks that BIDV must focus on in the coming time, including: implementing the Business Development Strategy for the 2021 - 2025 period, accompanying the banking system to complete the Development Strategy of Vietnam’s Banking Sector to 2025, with a vision to 2030; strengthening the system governance capacity towards practices and improving credit quality; innovating and applying modern technology in banking operation; improving financial capacity... 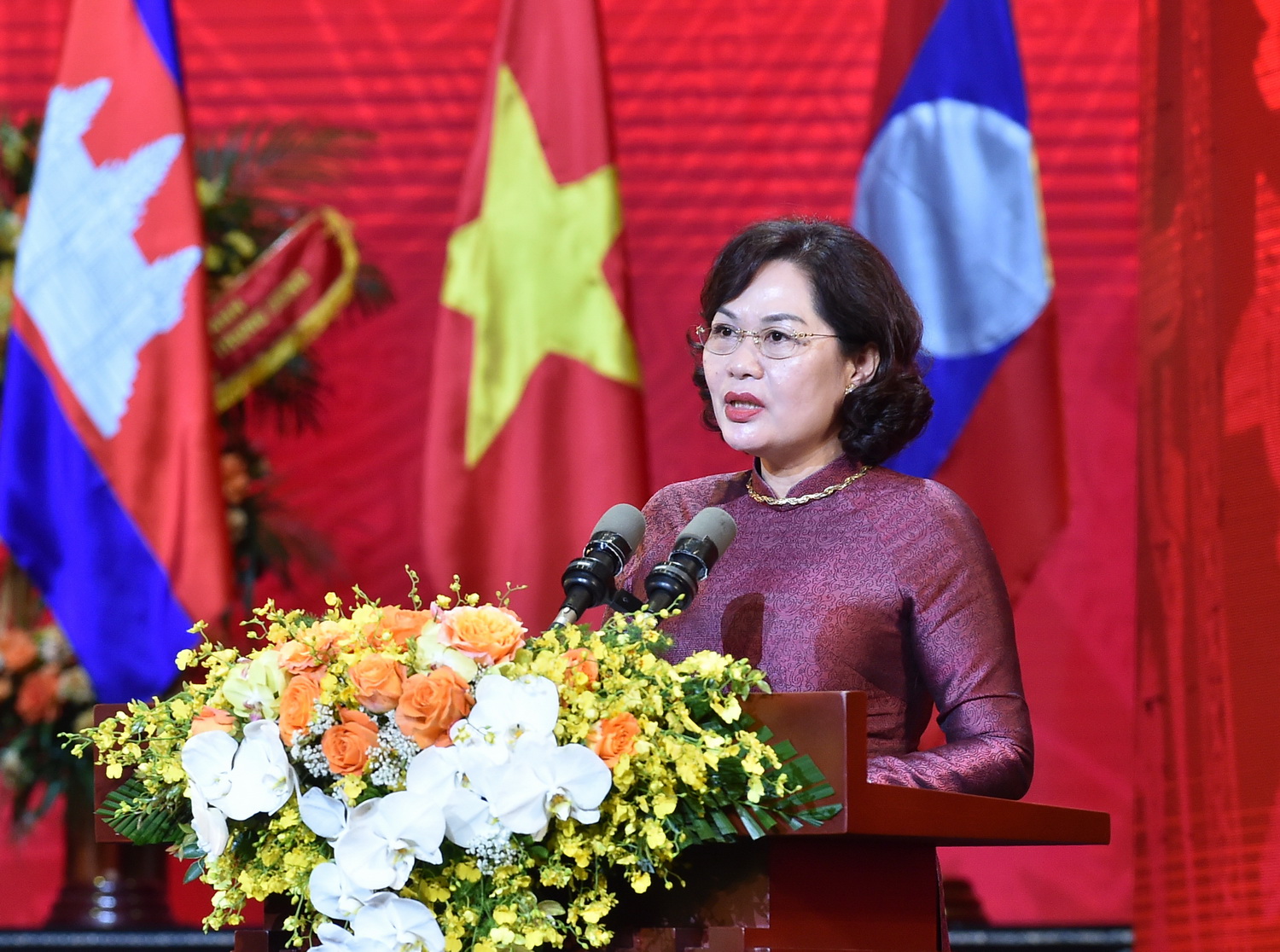 Mrs. Nguyen Thi Hong- Governor of the State Bank of Vietnam spoke at the event

Also on its 65th anniversary, BIDV announced its new brand identity. Accordingly, the Bank retains its full name as “Joint Stock Commercial Bank for Investment and Development of Vietnam”, abbreviated as “BIDV”; its diamond logo is replaced by an apricot blossom with a moving five-pointed star at the center. The brand colors are also adjusted with emerald green as main color and yellow as complementary color.

This new brand identity is a move in BIDV’s strategy to affirming a consistent image of a dynamic, friendly bank, always ready for its mission of bringing the best benefits to customers, shareholders, employees and communities, in line with the trend of digital transformation and international integration. In the coming time, BIDV will continue to undergo robust transformation to provide high quality products and services and accompany and cooperate with customers and partners for mutual development.