VND20 billion Tet gifts for the poor from BIDV

On 2 January 2020, BIDV announced 40,000 Tet gifts for the poor worth of VND20 billion and the summary of the running competition “Tet for the poor”. This is the 12th consecutive year BIDV implemented the cross-country charity with a total of 650,000 Tet gifts valued VND180 billion.

Since 2009, Tet gifts have been funded by the Trade Union of Bank for Investment and Development of Vietnam (BIDV) from the officers of the bank. VND5.8 billion out of the total VND20 billion were funded through the online running competition named "BIDV Smile - Tet for the poor 2020". Each gift include 1kg of pork, a pair of rice cakes, 1 box of dried candied fruits, 1 box of cookie, 1 bottle of alcohol, 1 bottle of cooking oil, and a pack of seasoning, valued at VND500,000. 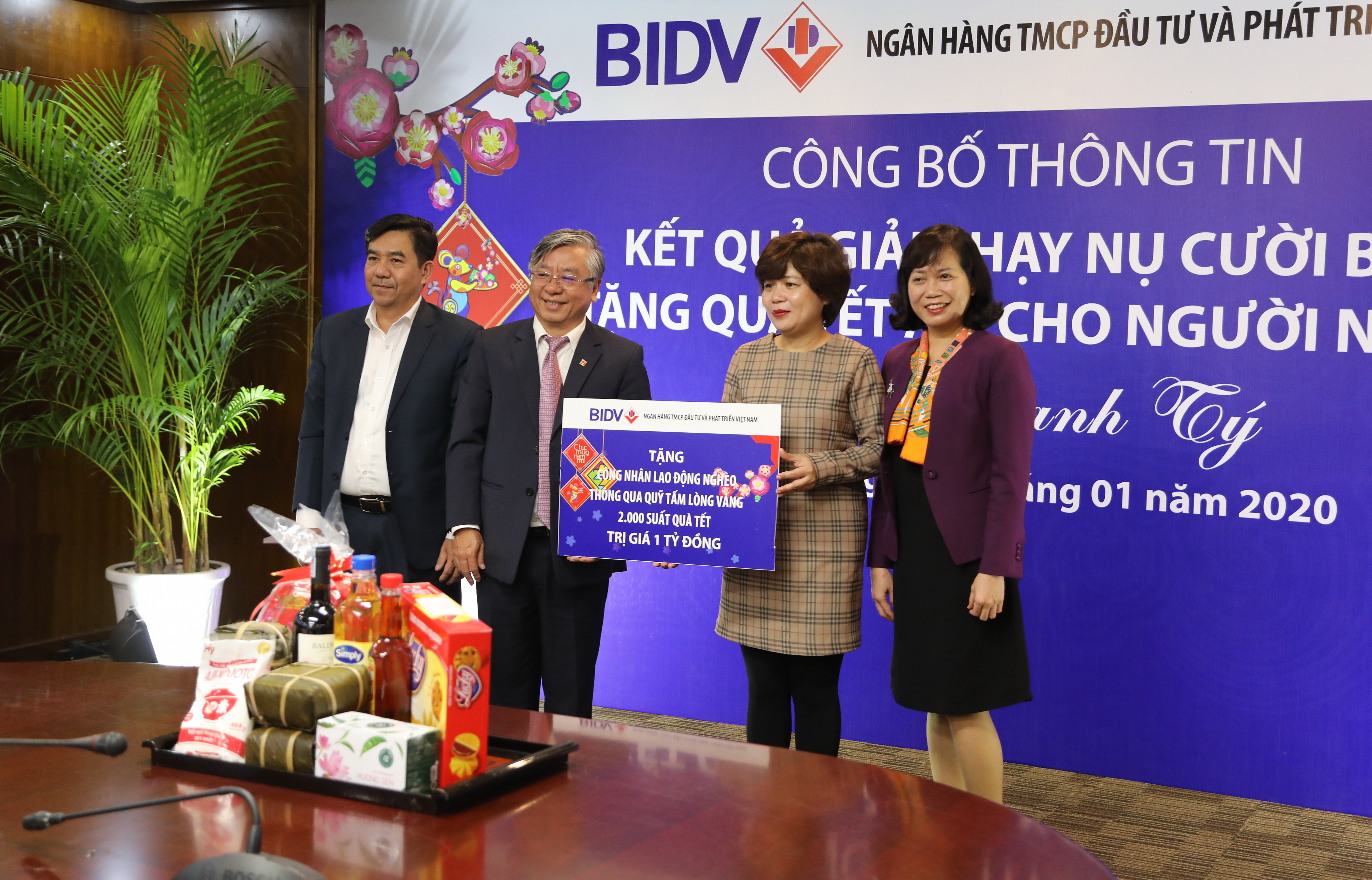 The "Tet gifts for the poor" charity aims at people in remote or disaster areas, low-income workers, poor patients, the lonely elderly, orphans, etc. The Trade Union of BIDV's branches will coordinate with local agencies such as the Provincial Labor Union, social protection funds, wound care centers,etc. to directly hand the gifts.

Mr. Tran Xuan Hoang – Deputy General Director, President of BIDV’s Trade Union said: “This is our annual charity for the last 12 years. The Trade Union of BIDV Branches will deliver the gifts to the poor before 23 of December, and to poor patients before 28 December (Lunar Calendar), giving them a warmer begin of a new year.” 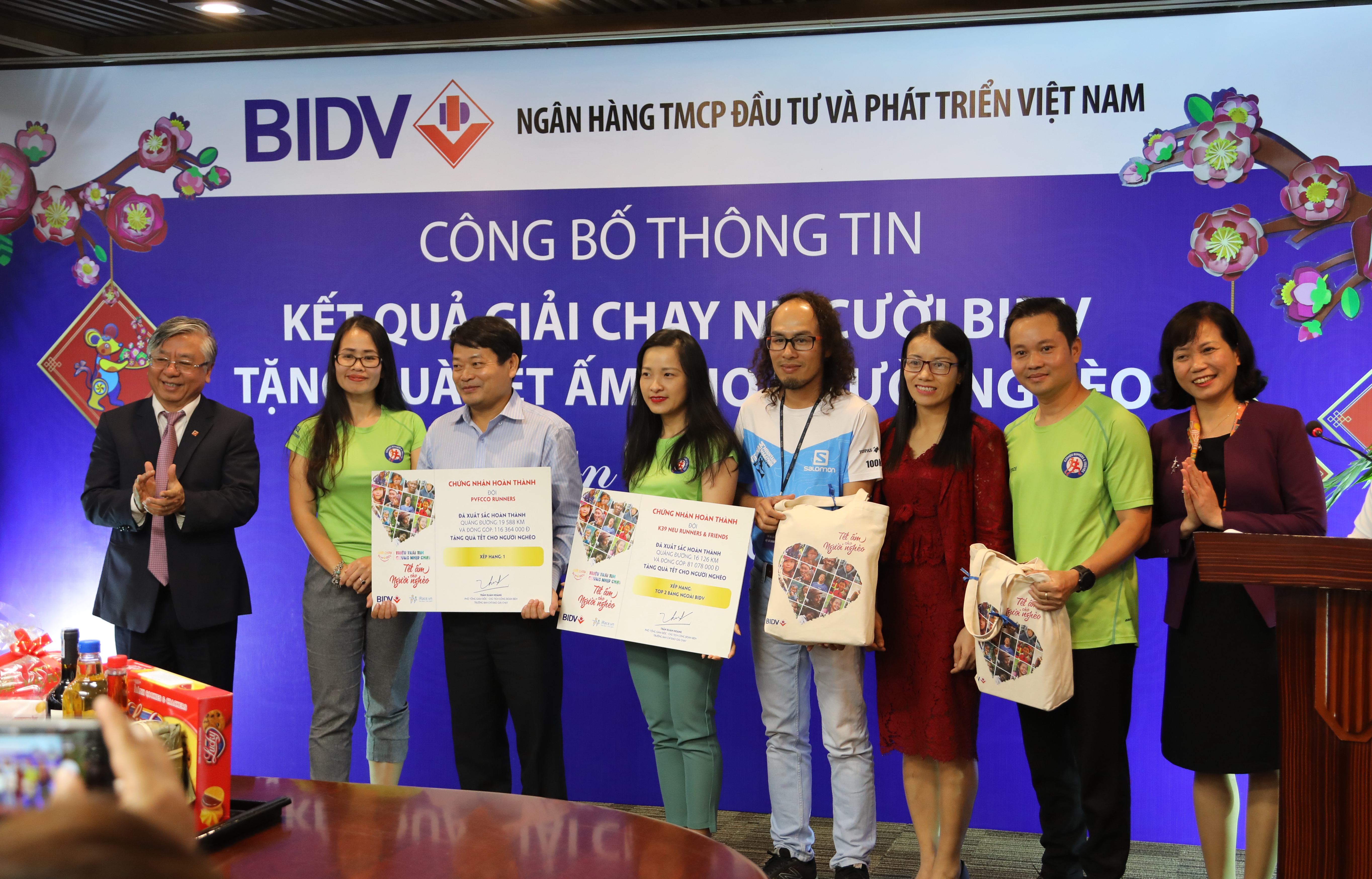 BIDV awarded the top runners of the competition

This year, the Tet gifts fund is raised through an online running competition named "BIDV Smile - Tet for the poor 2020", launching from 9 to 30 November 2019. For each kilometer finished by the participants, BIDV donates VND1,000 to the fund. With the message "Million hearts – One running beat", the competition has attracted 36,488 athletes, finishing a total of 1.8 million kilometers, thus more than VND5.8 billion in the total VND20 billion were funded through this competition.

At the ceremony, BIDV also announced the final results of "BIDV Smile - Tet for the poor 2020" running competition. Participating in this sport event, the participants not only build a healthy lifestyle for themselves and promote a fitness movement in the community, but also spread the love to families with struggles.

To motivate the participants, BIDV awards 20 pairs of traners, 1980 sport T-shirts, 2,000 belt bags and 2,000 eco-friendly totes to the top-ranked participants. For 13,000 paticipants completed a minimum of 22km in 11 days, BIDV also gives them a discount code of VND100,000 on BIDV Smartbanking.

The Tet gifts for the poor is BIDV’s annual cross-country charity program since 2009, with 600,000 gifts valued VND160 billion were handed to the poor.

Bank for Investment and Development of Vietnam JSC