The social security program “BIDV - For a green life” has been carried out, including the following programs: “One million trees”, “Flood proof community houses”, and “Fresh water for a green life”. On this occasion, BIDV also donated 65 ambulances totaling VND78 billion at the Announcement Ceremony which took place on 25 April 2022 in Hanoi on the occasion of its 65th anniversary (26 April 1957 - 26 April 2022).

In response to the “one billion trees” program initiated by the Prime Minister, BIDV will plant one million trees in the 2022 - 2026 period. The program expense is estimated at about VND50 billion.

This program will be implemented nationwide, with focus given to 45 provinces in 04 regions which are frequently affected by natural disasters, including: Northern Mountain region, Central region, Central Highlands, Mekong Delta. In 2022, BIDV will plant about 300,000 trees in various localities, of which 70,000 trees have been grown in Ba Vi National Park, Hanoi, Yen Bai, Phu Tho, Dak Lak, Nghe An, Ha Tinh...

In the 2022-2023 period, BIDV will donate to build 10 flood-proof community houses totaling VND25 billion in some localities which frequently suffer from natural disasters including Nghe An, Ha Tinh, Quang Binh, Quang Tri, and Quang Nam provinces (02 houses each).

Flood-proof community houses in localities have 2 main functions: a local cultural house for community activities and a shelter for local people in case of flood. This project is of great significance for localities that often suffer from natural disasters, joining hand with local governments to take care of local people in normal conditions and to protect their lives and properties in case of flooding.

In 2021, BIDV sponsored the pilot construction of a flood-proof community cultural house in Trung Thanh village, Cam Due commune, Cam Xuyen district, Ha Tinh province. The flood-proof community house has two stories and floor area of 500m2. It can accommodate about 250 people with essential living space during flood. Under normal conditions, the house acts as a cultural space for local people.

This year, BIDV continues to carry out “Fresh water for a green life” program in the Mekong Delta provinces with total budget of VND5 billion. Under the program, BIDV will coordinate with local authorities to promptly support local people to overcome the consequences of natural disasters such as drought, saltwater intrusion, maintain a stable life and develop production.

“Fresh water for a green life” program has been implemented by BIDV since 2020, donating 13,300 water tanks and 39 water purifiers to people in 5 provinces of the Mekong Delta severely affected by droughts and saltwater intrusion, including Long An, Tien Giang, Ben Tre, Kien Giang, and Ca Mau. The program supports people in flooded and drought areas to store fresh water for daily life and production.

Also at the event, BIDV donated 65 ambulances to medical facilities in 63 provinces and cities across the country on the occasion of its 65th anniversary. High quality ambulances funded by BIDV were ordered and manufactured separately, meeting technical regulations on environment, quality and medical standards. This type of vehicle is also used for medical examination and treatment during the recent outbreaks of COVID-19 in localities. These ambulances will help local medical centers, especially those in remote and disadvantaged areas take care of local people’s health. 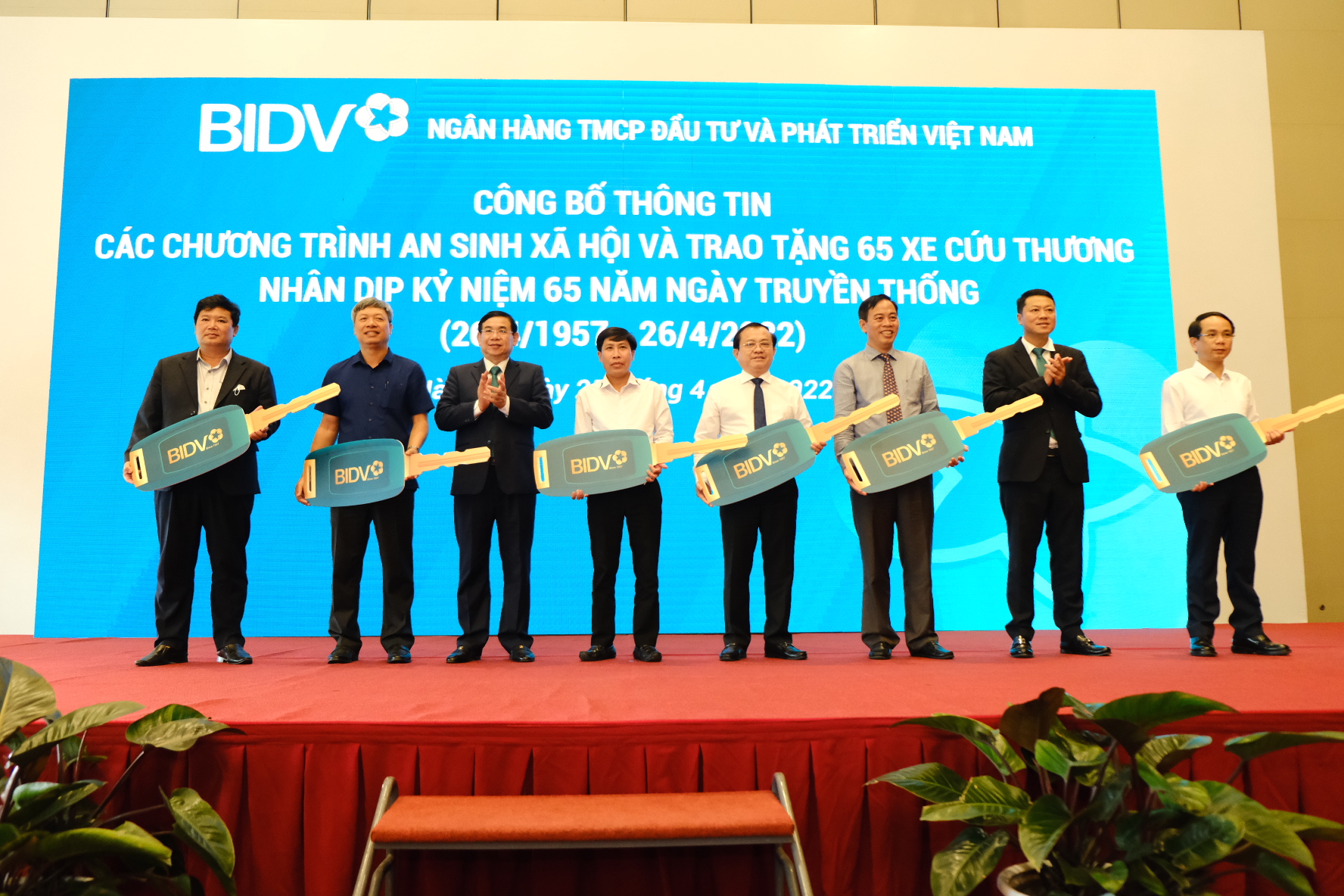 Mr. Le Tan Can, Standing Vice Chairman of Bac Lieu Provincial People’s Committee, represented localities to receive BIDV’s ambulances. He stated that: “BIDV’s donation of 65 ambulances on its 65th anniversary to provinces and cities across the country, including Bac Lieu province, is a meaningful and useful gift with humanistic meaning to medical centers nationwide”. 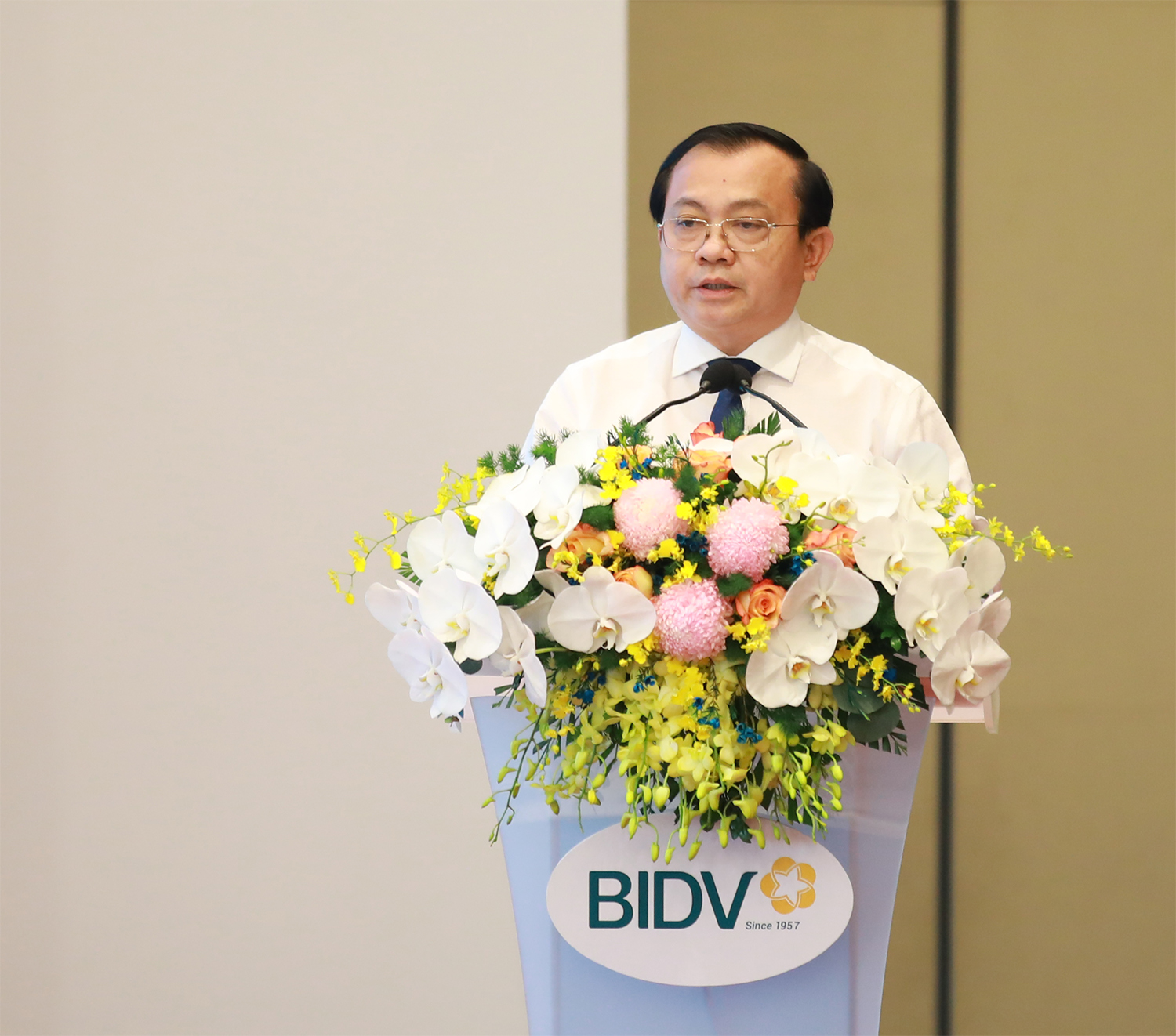 In addition to carrying out financial and monetary tasks to serve the country’s economic development, BIDV always acts as an active supporter for social security programs using its own funds or soliciting contribution from its employees. Over the past 5 years, BIDV has spent nearly VND1,500 billion for implementing social security programs.

BIDV has taken many innovative ways to spread the compassion and sharing to customers and communities. Through programs such as: ‘Warm Tet for the poor”, “Sharing love in every transaction”,... BIDV has encouraged customers and the public to join hands in making contributions to our communities. BIDV also successfully implemented BIDV Run from 2019 to 2022. The program has spread widely, attracting more than 150,000 athletes, contributing to enhance the sports and fitness movement among BIDV staff, customers and communities. 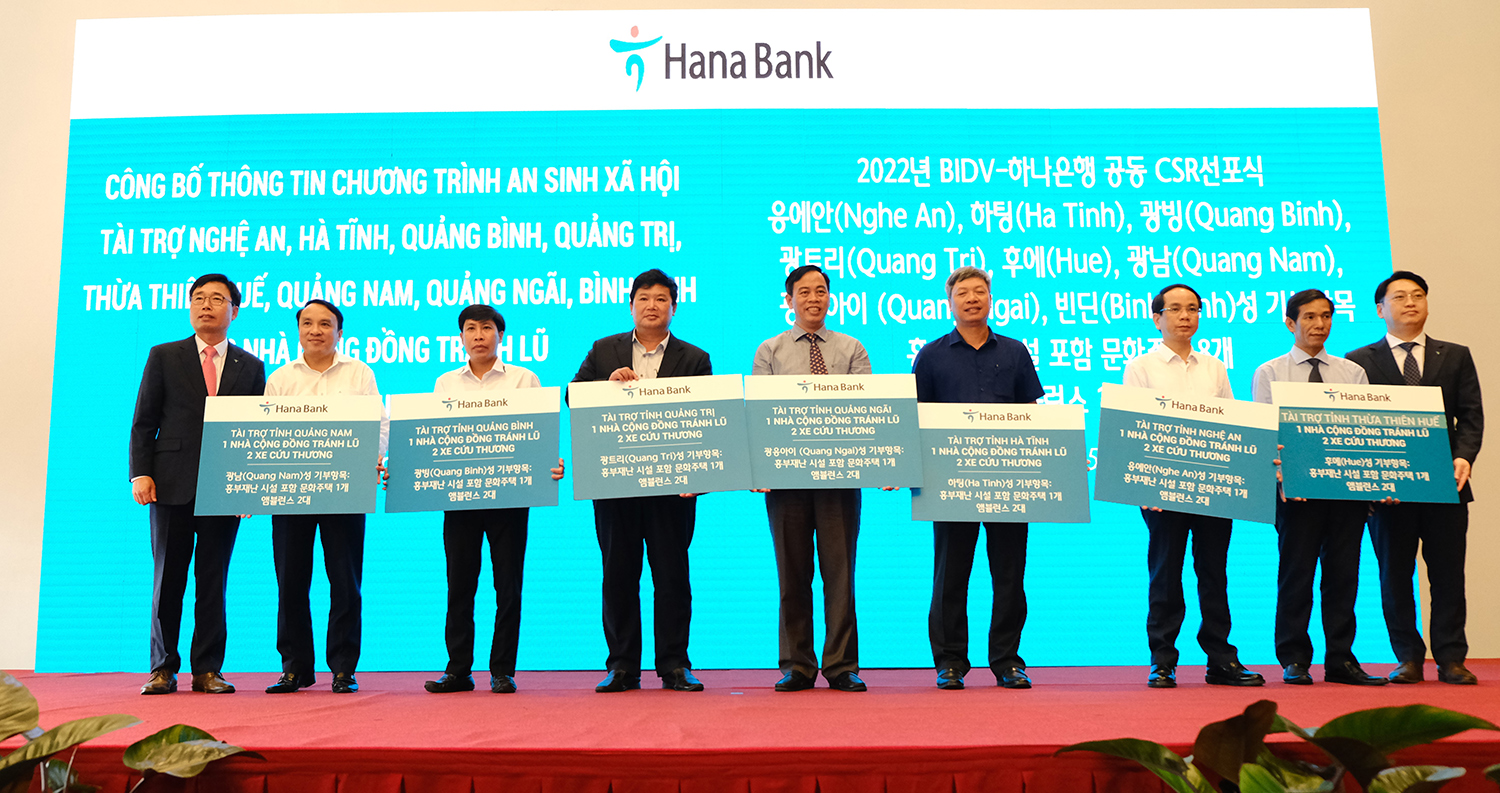 Also on this occasion, Hana Bank, a Korea’s leading bank and strategic shareholder of the Joint Stock Commercial Bank for Investment and Development of Viet Nam (BIDV), announced a donation of VND40 billion for flood-proof community houses and ambulances in Vietnam. Accordingly, Hana Bank will financially support the construction of 08 flood-proof community houses and 16 ambulances in the central provinces, including: Nghe An, Ha Tinh, Quang Binh, Quang Tri, Thua Thien Hue, Quang Nam, Quang Ngai, and Binh Dinh (01 community house and 02 ambulances each). Hana Bank assigns its representative in Vietnam - Hana Bank branch in Hanoi - to implment this donation program.